[I] Corpus Christi College, Oxford, and its Trilingual Library 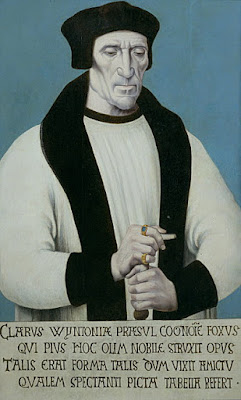 The first part of the exhibition introduces Richard Fox (d.1528), Bishop of Winchester and Founder of Corpus Christi College, Oxford: the exhibition will include a large reproduction of his portrait (no.1, above), as well as an earlier woodcut representation of him when Bishop of Durham (no.2), his crozier (no.3) and one of his ablution basins (no.4), commissioned by him as Bishop of Winchester. These will each be the subject of future blog-posts.

In 2017 Corpus Christi College, Oxford, celebrates the 500th anniversary of its foundation.

The anniversary will be marked in a number of ways, including an exhibition of treasures from the College Library, in Washington, D.C., and New York, of which I am the Guest Curator. This blog relates to that exhibition:


500 Years of Treasures from Oxford

The exhibition-title refers both to the College's 500th anniversary, and to the fact that the majority of the exhibits belong to the 500-year period from the 12th to the 16th centuries (although a few are as early as the 10th century, and a few others are as late as the 17th century).

The blog is intended to serve three purposes: first, of course, it is to help bring the exhibitions to the attention of anyone who may be interested; second, it will provide a glimpse of a few of the treasures that belong to the College, even before the exhibitions open, and after they have finished; and third, it will allow me to provide much more information about some of the exhibits than will fit on the exhibition labels.

My intention is to write 50 posts, roughly one each week from November 2016 until August 2017; in this way it should be possible to cover all the exhibits by the time the exhibition ends. If you have any interest in books and manuscripts earlier than circa 1700, I hope you will subscribe to this blog: you can subscribe to follow it by email using the widget at the top of the right-hand column of this page.