The Psalms in Hebrew and Latin

As mentioned in the previous post, several volumes in the exhibition are open at the beginning of the book of Psalms, to allow and encourage comparison between them. In this post we will look at a few more.

Perhaps the best illustration of the fact that 13th-century Christian scholars wanted to engage with and study the Hebrew text of the Psalms is shown by this volume:
What this image shows is St Jerome’s third translation of the Psalms (from Hebrew into Latin), written in a narrow column towards the right-hand edge, Psalm 1 beginning with a large blue decorated initial “B”. To its left, in much larger script and in a wider column, is the equivalent Hebrew text. Here is a detail:

We can be sure that this book was written for a non-Jewish reader for two reasons. First, the Hebrew is written with “pointing” (i.e. the dots and dashes under the words) to indicate the vowels, which would not have been needed by anyone who could read Hebrew fluently: 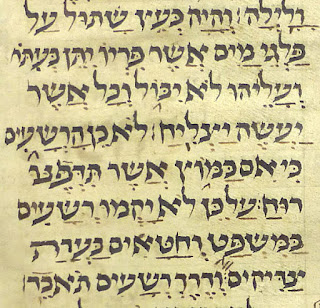 Second, even though the overall layout of the page seems to suggest that the Hebrew is the dominant text, and the Latin subsidiary, the text is written so that the pages are turned from right to left (i.e. the reader reads towards the right) instead of the opposite as would be found in a Hebrew book. The first note in the top right corner of the page draws attention to this fact: in Latin it states that the each page is read towards the right in the Latin manner, whereas the individual lines of Hebrew are written and read towards the left according to Hebrew custom:

We can also be sure that the book was indeed studied by 13th-century Christians because of the numerous Latin annotations which occupy much of the four outer margins, as well as the space between the main Hebrew and Latin texts:

Similar in some ways, but printed instead of manuscript, and produced almost 300 years later, is this 1535 edition of the Psalms in Hebrew surrounded by a Latin commentary:
Although it is open in the exhibition at the beginning of Psalms: 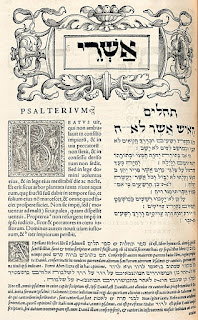 the title-page lists all the Old Testament books it contains: the Prophets, Psalms, Job, Proverbs, etc.: 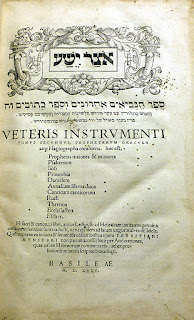 The 1535 date of publication is in Roman numerals (M. D. XXXV.) at the bottom of the page, and thus it is interesting to note that on the following leaf there is an inscription recording that it was given to Corpus Christi College by the first President, John Claymond (discussed in a previous post):

He died within two years, in 1537, so it is clear that he bought the book very soon after publication.

A curious feature of the decoration of the book is that the printer apparently did not have decorated initials suitable for every book: the initial "B" of Psalms begins with an image of Adam and Eve, a subject more appropriate to Genesis: 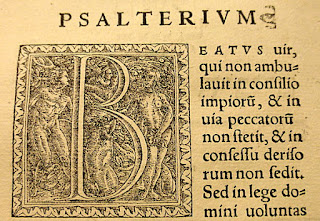 Details of the two exhibits discussed above are: