A Greek First Edition and its Manuscript Exemplar 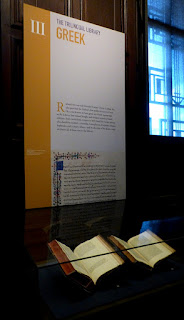 In addition to books that are overtly "treasures", the exhibition includes a number that require the visitor to look closely in order to understand why they are so special, unusual, or important. The great interest of two such books only becomes apparent when they are placed side by side.

Corpus Christi College, Oxford, MS 97 is a copy of Proclus on the Elements of Euclid, written in Italy, perhaps Padua, circa 1500.

There are two particularly notable features of the manuscript as it is displayed in the current exhibition (here on the left): 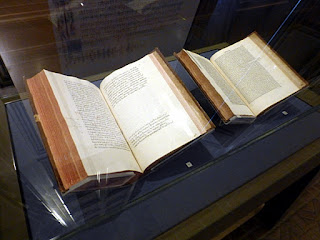 Most obviously, on the right-hand page, there is a large gap in the text, equivalent to 14  lines of writing: 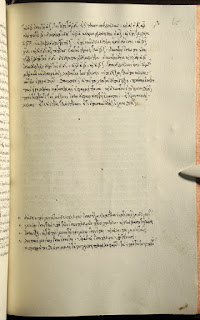 Such situations occur in manuscripts when the scribe is unable to read the text that he is copying, either because it is damaged in some way and a part of the text is missing, or because it is illegible for some other reason. It is very unusual to find such an extensive gap, however.

Less obviously, on the facing page there are several markings in red pencil:

The purpose of the red markings becomes apparent when -- as in the exhibition -- the manuscript is placed next to the printed first edition of the text. They are known as "casting off" marks, and are used by printers when they prepare the text of a manuscript for type-setting.

Because the pages of a book are not printed in sequence, 1, 2, 3, 4, etc., but by "imposition", with at least two pages printed on one side of a sheet before turning it over to print the other side, it is necessary for printers to calculate in advance what will be on each page of a whole sheet of paper, before it is folded. For example, in the very simplest situation, a sheet of paper with a single fold might have pages 1 and 4 printed on the outside, and pages 2 and 3 on the inside. Thus, to print the inside pages a printer first needs to know where the text on page 1 will end and where page 2 begins; and to print the outside pages, he has to know where the text on page 3 will end, so that he knows where to start the text of page 4.

To deal with this challenge, a printer would mark-up his manuscript to indicate where each page would begin and end: these are the "casting off" marks.

In the present case we can see that the red zig-zag mark in the middle of the text corresponds to the point at which a new page begins in the printed edition:

At the top right of the text we can also see that this is page "63": 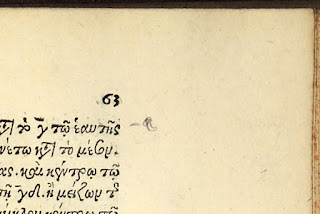 and at the bottom right that it has a leaf signature[*] "Z 2" (in other words, this is the second leaf of the quire marked "Z": 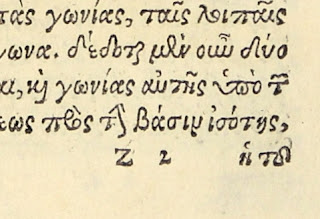 Another proof that the printed book was based directly on the manuscript can be found in the right-hand margin of the right-hand page. Here there is no visible gap, but the printer has added a note in Latin "Hic desunt versus circiter 14" (About 14 lines are missing here):

It is known how the Corpus Christi manuscript came to be the one used by the printer of the printed edition: in 1531, Simon Grynaeus, Professor of Greek at Heidelberg University, was in Oxford looking for Greek texts that had never been printed, and John Claymond, the College's President, lent him MS 97. Grynaeus returned the manuscript a few years later, together with a copy of the new edition, which he printed in 1533.


[*] Confusingly, what in manuscripts studies is known as a "quire" (or "gathering"), is often called a "signature" by printed book specialists. Before about 1200, it was normal for each quire to have a single mark (typically a sequential letter of the alphabet, a, b, c, ...) on the final page: for manuscripts, this is a "quire signature". After about 1200 it became common to mark each bifolium with the quire letter plus a number on each leaf in the first half of a quire (ai, aii, aiii, aiiii, bi, bii, ...): these are "leaf signatures".