Printed books and manuscripts in Latin occur in every section of the exhibition, except those devoted exclusively to Greek and Hebrew books, so it did not seem necessary to include many in Section II, specifically devoted to "Latin", one of the three main languages of the Trilingual Library of Corpus Christi College, Oxford.

In the Folger arrangement this section consists of two pairs of books. I hope to devote a blog post to each pairing, of which this is the first.

An all-pervasive theme of the exhibition is that of change. In the exhibits we witness chronological changes in technology from manuscript books to printed books; we see a change from books usually made of parchment to ones usually made of paper; we see a change in popularity from medieval authors to Renaissance ones; and of course we see the changes brought on by the scientific discoveries of the 17th century.

The first of the two "Latin" display-cases exhibits two very different manuscripts, their juxtaposition intended to highlight some of these changes. On the left is a copy of St Gregory the Great's Moralia in Job, and placed to its right is a collection of works mainly dealing with the lives of illustrious men of the past. Both are illuminated manuscripts on parchment, written less than a hundred years apart, but that is about the extent of their similarities. 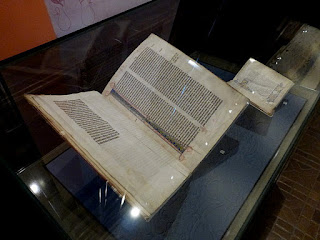 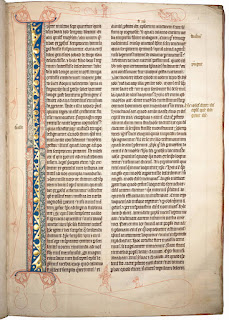 The second is much smaller (230×150mm / 9×6 inches); and it contains a compilation of short works, mainly by Classical and Renaissance authors and translators: 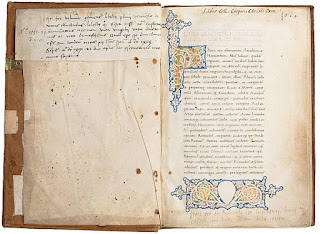 The first is written in large, black, angular, compressed, Gothic script, with frequent abbreviations, while the second is written in a comparatively rounded, spread-out "humanistic" handwriting, with the lines much more widely spaced and with most words written-out in full:

The individual letters of the second are much easier for modern viewers to recognise, because printed typefaces still in use today were modelled on this kind of script.

The first volume is medieval (late 14th century) and English, the other is Renaissance (mid-15th century) and Italian, and each has decoration typical of its time and place of production. Perhaps the most striking feature of the medieval volume (apart from its huge size) is its whimsical penwork decoration, in the upper and lower margins. Despite the very serious theological nature of the text itself, it is embellished with secular imagery, perhaps simply intended to amuse the reader: 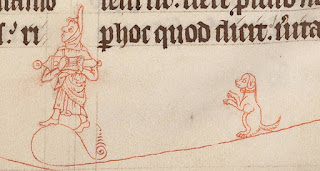 The decoration of the Italian Renaissance volume is very sober by comparison. The first letter of the text, an initial "P", is embellished with so-called "white vine-stem" decoration, typical of Italian 15th-century manuscripts: 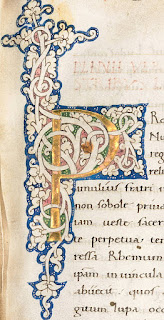 The lower margin of the first page has a decorative border, with a space left for a shield which remains blank. This suggests that the volume was made "on spec" -- i.e. instead of being commissioned by a particular patron, it was commissioned from the scribe and artist by a bookseller without a specific customer in mind:

Two more features are shown in the final image below. Facing the start of the text, most of a flyleaf has been cut out of the volume (perhaps for re-use as a convenient piece of scrap writing material), but an inscription in Latin at the top remains. This lists the contents of the book, and then continues to state that "I, John [Shirwood], Bishop of Durham, bought it in London on about the 22nd of December 1464.":

Richard Fox, Bishop of Winchester when he founded of the College, had previously been Bishop of Durham, and John Shirwood had been his predecessor. Fox bought many of Shirwood's Latin books for the College after the latter's death.

Finally, in the lower left corner of the image above one can see the remains of a metal chain-staple. This is a metal fitting that would have been used to attach the book by a chain to a metal rod in the Library, preventing it from being taken away. It is from physical traces like this that we can reconstruct in our mind's eye what the Library of Corpus Christi College would have looked like 500 years ago.

Descriptions of both books may be found in R.M. Thomson, A Descriptive Catalogue of the Medieval Manuscripts of Corpus Christi College, Oxford (Cambridge, 2011)