A large number of the books listed in the 1589 catalogue of the Library (to be the subject of a later blog post) can be conclusively identified with books still in the collection today, thanks to the fact that they include inscriptions recording that they were given by Richard Fox, who died in 1528: they ask readers to pray for the soul of Richard Fox, former bishop of Winchester, founder of Corpus Christi College, who is recorded as having given the book.

The Latin wording is does not vary much, and the image above shows a typical example:

The fact that the reader is asked to pray for Fox's soul suggests that he was already dead when it was written, and thus that the book may have been a bequest. But other books were certainly given during Fox's lifetime and contain similar inscriptions, with dates as early as 1519.

The inscription shown above appears on the first page of copy of Plautus's Comedies, printed at Venice in 1472. The first page of the main text has blue and red initials, an illuminated border, and heraldic arms, added by hand: 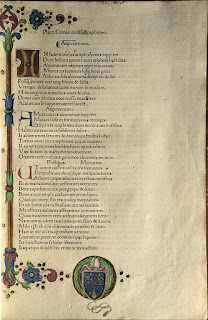 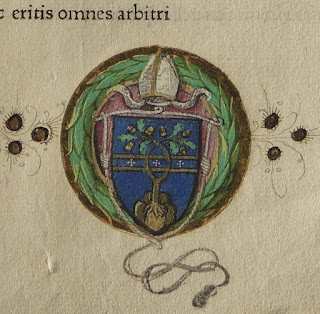 The book apparently belong to an unidentified  bishop (to judge by the mitre), who belonged to the della Rovere family: their arms consist of a gold oak tree with entwined branches ("della rovere" means 'of the oak' in Italian), against a blue background: 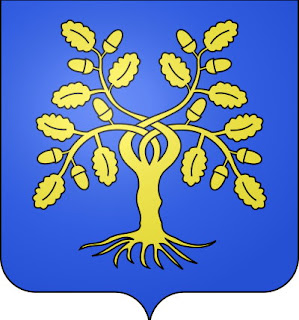 Like a number of other Latin printed books and manuscripts made in Italy, this one was bought by Richard Fox from the estate of his predecessor as bishop of Durham, John Shirwood, who died in 1494: the colophon page has Shirwood's inscription recording that he bought it at Rome on May 15, 1481. Future blog posts will discuss some of these other Shirwood books.