St Jerome and the Three Languages of the Bible 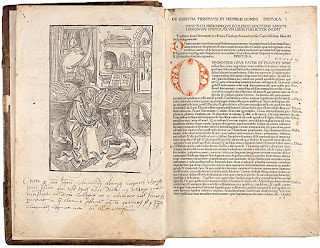 A theme that runs through much of the exhibition is the ambition of Richard Fox, the College's Founder, and John Claymond, its first President, to form a tri-lingual library, just as one had been founded at Alcalá de Henares, Spain, about a decade earlier in 1508. (At exactly the same time that Fox was founding the College, Erasmus was helping to found the Collegium Trilingue at Leuven, in the Netherlands, in 1517-18; Melancthon became the first professor of Greek at Wittenberg, Germany, in 1518; and a similar trilingual college would be founded in Paris in 1530.)

The importance of Greek, in addition to Latin, was obvious in the new intellectual climate of Renaissance England, with its increased interest in Classical texts and the increased availability of such texts in relatively inexpensive printed editions. Greek is also the language of the New Testament. Similarly, Hebrew is the original language of most of the rest of the Bible: if Christian scholars wanted to properly understand and edit the text, or if they wanted to understand Jewish interpretations of the Scriptures, they needed to learn the language.

The importance of going back to the original languages of the Bible had been understood by St Jerome, who used Greek and Hebrew manuscripts when making his new Latin version in the late-4th to early-5th century.

In a copy of the Letters of St Jerome, printed at Basel in 1497, there is a frontispiece image of Jerome in his study (portrayed, as usual, dressed as a cardinal), removing the thorn from the lion's paw, in accordance with a popular legend: 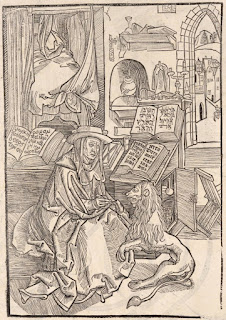 This is the earliest woodcut whose design can be attributed to Dürer, and for our purposes it is interesting to see that the desk from which Jerome has turned his attention has three open books: on his writing desk the text immediately above the lion's head we can read the opening words of Genesis in Jerome's Latin version: "In principio ..." (In the beginning ...), and there are two other books open for consultation; in these we can read the same text in Greek (to the left) and Hebrew (above the Latin book):

Another reason why I selected this book for the exhibition is that, immediately below the frontispiece image of St Jerome, is an inscription, recording that John Claymond gave it to the College, which is referred to as a bee-hive ("alvarii", in the first line), a metaphor used by Richard Fox. The inscription goes on to record that it was lent to Fellows on condition that it would not be removed from the College. This is therefore evidence of the "circulating" library, as opposed to the collection that was chained in the Library.