Contemplacyon of Sinners, by William Touris, 1499

The Contemplacyon of Sinners is an Anglicised version of a work written in Scots by William Touris, a Franciscan Observant, printed at Richard Fox’s expense in 1499, while Bishop of Durham. The College’s copy is included in the exhibition as an example of his religious patronage, and because its frontispiece represents the earliest visual representation of Fox. The text of the prologue, facing the woodcut, begins: 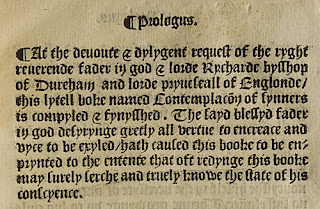 Although the decorative printer's device at the end of the text, with the letters "W" and "C", is a version of William Caxton's, the colophon tells us that this book was printed by his colleague and successor, Wynkyn de Worde, several years after Caxton's death: 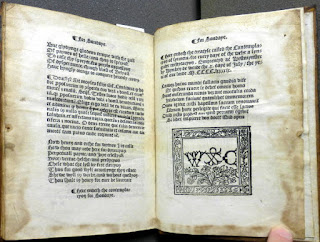 This copy was given to the College in 1708 by a former Fellow, Nathaniel Ellison, in 1708, as recorded on the first page, on which is printed a second impression of the same woodcut. 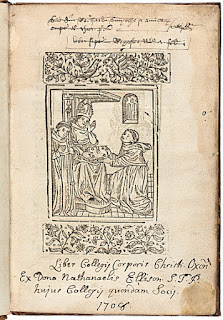 The inscription in the upper margin, presumably crossed-through by Ellison, is discussed in a separate blog post here.